We are living in strange times, and we count ourselves fortunate to be able to continue communicating with friends and family, even if we can't give them a physical hug.

We're not booking any physical fayres at the moment, but we hope to be back out 'on the road' before Christmas. If you'd like us to come along to your event just drop an email to This email address is being protected from spambots. You need JavaScript enabled to view it. and we'll see what we can do. We have tried a few Virtual Fayres - follow us on Facebook to find out where we'll pop up next.

The on-line store is up and running, and we are stocking it with more goodies each month. You can see some of our latest listings in the shop at the head of this page - just click to go directy to the shop.

What is 'Fused Glass'?

There are many forms of art using Glass, including Blowing, Lampwork, Engraving, and Fusing.

Glass Fusing is also known as 'Warm Glass' or 'Kiln Formed Glass'. We'll refer to it as Fused Glass.

Very simply, Fusing is the process by w 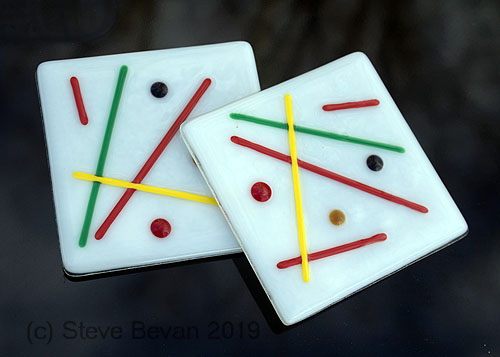 hich two or more pieces of glass are placed in a kiln and heated until they get to such a temperature (over 800 C) that they join (fuse) together into a single piece. Once it's done, there's no going back - you can't simply separate the pieces once they have fused together. The trick is to get the glass to the required temperature to fuse, then back down to room temperature without it breaking through Thermal Shock, and without leaving the piece stressed due to sudden temperature changes. To achieve this, the kiln is programed to raise and lower the temperature at set rates to reduce shock, and to hold the temperature for set periods during which the glass will soak and transition to (hopefully) your anticipated design. The full cycle from room temperature up to fusing temperature and back to the start will typically take over 12 hours.

Here is an example of a simple coaster square made from a layer of coloured glass with a layer of clear glass on top, A number of thin glass rods known as 'Stringers' and small dots of glass have then been arranged in a pattern.

Glass Fusers work to a '6mm Rule' - the glass we use will try to get to 6mm thick when it is heated to a high eniough temperature. So if you stack 3 layers of 3mm glass on top of each other and full fuse, the piece will spread out and reduce down to 6mm - sometimes with unexpected results. Similarly, if two pieces of 2mm glass are stacked together and fused, the piece will tend to shrink in at the sides, and attempt to get up to 6mm thick where it can. Again, there can be some interesting results.

Once a piece has been fully fu 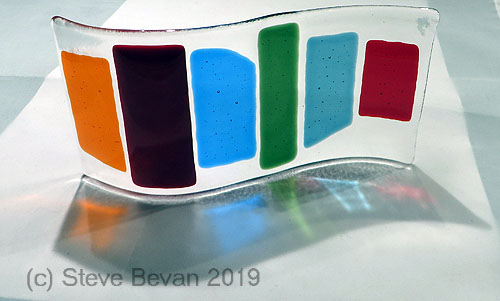 sed, it can be shaped by Slumping into, or Draping over a mould. These techniques take place at a slightly lower temperature that a 'Full Fuse'. Usually we'll Slump by placing our flat piece of fused glass over a shallow ceramic mould, and then heating  to around 640 C. Again the kiln will be programmed to heat, hold, and cool at specified rates that allow the piece to gently take on the shape of the mould. When it's all cooled down, the piece can be separated from the mould.

This example has been fully fused to melt together a clear sheet of glass with some abstract rectangles and other shapes of coloured glass. Once the full fuse was completed, the piece was laid over a wave shaped ceramic mould and Slumped to give this gentle shape. 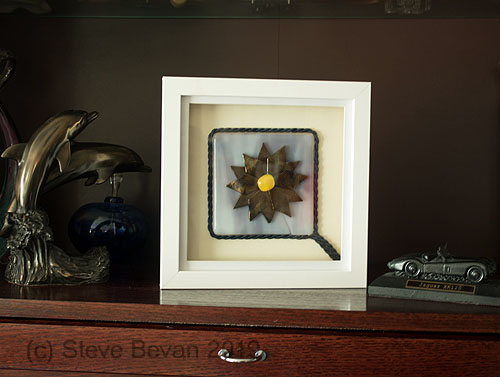 Tack fusing takes place at around 680 C. At this temperature the glass is hot enough to join multiple pieces together, but it's not enough to allow it to flow. A Tack Fused piece retains much of its orignal texture.

This piece is constructed from a fully fused coaster made of two pieces of 3mm glass, onto which a pattern of diamond shapes have been arranged in a  flower pattern, complete with a yellow centre piece. The piece was then Tack Fused to make a single piece, which has been mounted in a box frame for display.